A film of journey and self-discovery 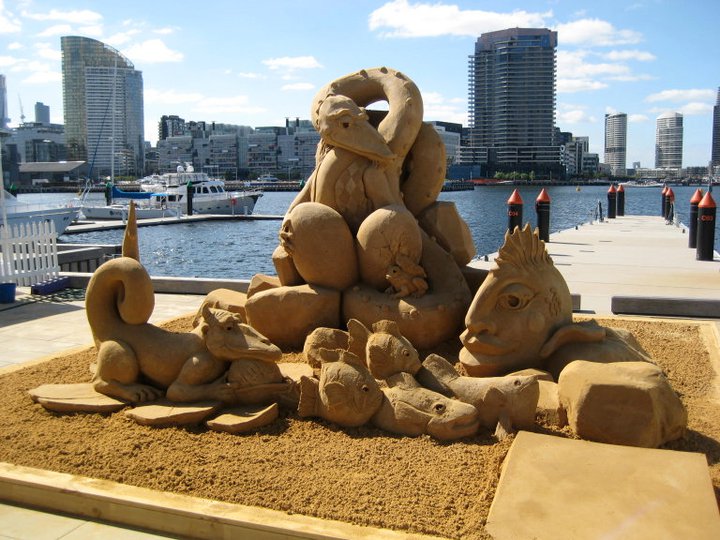 Eight year old Sarah, who likes new things and believes in magic, is woken by her angel, Firefly, who suggests they play a game in which they don’t do anything they normally do.

Sarah convinces her father, Sax, a frustrated saxophone player and creature of habit, to go along with this. They leave home and meet a brightly dressed pavement artist, Zoe. She invites Sax to play, while she draws and Sarah dances.

They meet the director of the Auckland Festival, Adam, while making a sandcastle on Bondi beach. Adam is an amateur magician, who meditates. He invites them to do a sand sculpture at the festival, if his boss, Councillor Thomas, can be persuaded.

Sax and Zoe fall in love, but she has a fear of commitment and wants to keep the friendship platonic, so she invites Sax and Sarah instead to do a sand sculpture with her at the Adelaide Fringe. Sarah reluctantly agrees to go, warning her father against girlfriends, and they set off in Zoe’s combi van across the changing desert landscape.

They arrive at the Adelaide Fringe Festival and their transient art form is appreciated, but provides little income in the hat. They meet Adam again, who charms Sarah with some magic and offers them flights and a hotel in Auckland, if they create a sand sculpture at the Auckland Festival. Sax and Zoe grow closer and consummate their relationship.

Despite being in the midst of her first Fringe exhibition, Zoe is convinced to do Auckland, however their work there struggles initially to get recognition and they battle Councillor Thomas, who questions the cost and cultural value of their art. When rain destroys the sculpture, they refashion it in the likeness of Councillor Thomas, who is outraged.

Adam is fired, but there is a surge in public recognition and community involvement with the festival through the publicity. Adam becomes the sculptor’s manager, Sarah and Zoe’s relationship strengthens and Firefly appears less and less. The festival asks them to extend the season, but Sax and Zoe refuse, explaining that the value of the art is in its transience. Sarah wants the family to stay together however and, through Firefly’s disappearance, convinces them to stay and do another season.

They create a sand mandala in a shopping centre, which changes the space and transforms the shoppers into a community. Again they battle ignorance in the form of careless cleaners and the shopping centre owner, who is revealed to be Councillor Thomas. This builds to a climax when he tries to have them evicted and Adam and Sarah must perform real magic to resolve the confrontation.

Pressure from shopkeepers and the media eventually makes Thomas back down and see the value of their work to his business. In the resolution they run over the sand at Piha beach and climb Lion Rock, a ‘magic mountain’, where Sarah must put her beliefs into practice to get past a dangerous slip and, at the top, Sax and Zoe cement their relationship.

On this site you can find information on the auditions for the roles in this movie and an overview of True Believers.

On this site you can also check out the production credits and production photos for Butterfly Crush, find more information on the cast, the development process and the production, find an outline of the story plus stills, and view podcasts.