Courting Chaos is a coming of age romantic comedy set in Los Angeles, in which a Beverly Hills girl falls for a Venice Beach street clown named Chaos and she must overcome her inhibitions and become a clown herself for the relationship to succeed.

Writer/Director Alan Clay is in Los Angeles to audition LA based actors for the roles listed below. The film will be shot this summer, on location, at Venice Beach.

GINGER is a model in her early twenties, an innocent girl from a sheltered upbringing, who's mother, Darlene has managed her career from an early age. Keen to break out of her mother's world and find her own path, she forms a relationship with Chaos. Her inhibitions about playing with people and her sense of order and tidiness are confronted as the relationship grows and she eventually triumphs over these by developing her own clown show. This character requires good acting skills. Clown skills are desirable. She also skates.

CHAOS is a street clown in his mid to late twenties, who is a champion of randomness and improvisation. He is in an open relationship with Dancer, but gradually is won over by newcomer, Ginger. He is a 'space case' who is conscious of the chaos of the universe and his small part in it and uses this as an excuse to avoid commitment. He is random and lateral in his approach. He reads people well and loves the diversity of humans. This character requires good acting, improvisation and clown skills.

MADONNA is in her late twenties / early thirties. She carries her gear in a silver road case and wears striking colored shirts and tights, with floppy floral skirts and a pair of yellow glasses with no lenses. Her show is built around physically challenging people's comfort zones, with a juggling climax. It is not working like it used to however and an accident pushes her to experiment with her movements instead and, through this, to find a new show. Movement and acting skills are required for this character. Juggling and clown skills desirable.

DANCER is in her mid twenties. She is comfortable with her body and the clear skin of her face is studded with piercings and other jewelry. She's a trickster who knows how to provoke people and get away with it. She does a physical, movement based show, from which she gets her name. She is in an 'open relationship' with Chaos and is jealous of Ginger's growing relationship with him, teasing her with pranks. Movement and acting skills are required for this character. Clown skills desirable.

TC is in his early to mid twenties. He wears fashionably torn shirts revealing his well-formed chest. He is one of the highest earners amongst the clowns and he is young, sexy and never short of money. So, the way he figures it, this should come with a bit of attitude. He plays the field in his relationships, but ends the film marrying Dancer. This character requires acting and clown skills.

DARLENE is in her forties, a former beauty queen who run’s a talent agency and manages the modeling career of her daughter, Ginger. She dresses to perfection and is generally in a state of enthusiastic excitement. She lives herself out through Ginger's successes and, as Ginger is seduced by the freedom of clown, she desperately tries to keep her on track for the Top Model contest. Eventually however she is forced to kick her out of home and immediately develops a relationship with her young male model assistant. Good comic acting skills required.

JEFF is a model in his early twenties, who works as assistant to Darlene in the agency. He is normal in his dress and ambitions, but emotionally and physically awkward in relationships and although he fancies Ginger, he ends the film in a relationship with Darlene who he admires. This character requires acting and physical comedy skills.

If you're based in Los Angeles and interested in any roles in the film, please email auditions@artmedia.net.nz with information of your experience and training, DOB, your height and attach a recent photo. 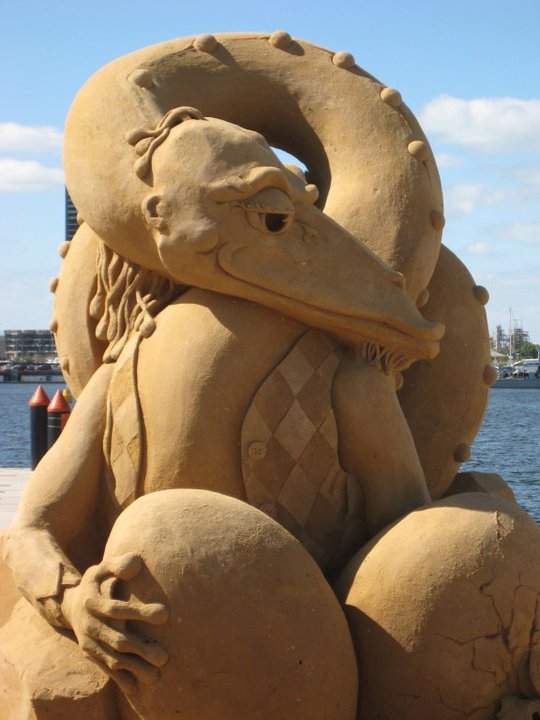 True Believers is a feature film project, based on Alan Clay's third novel, 'Believers in Love'.

A father and daughter team of sand-sculptors embark on a crazy adventure with his new girl friend, exploring the transient nature of art and life, from Bondi Beach to the Auckland Festival, finding love and discovering the magic in life.

If you have auditioned for these roles and been called back, you are still under consideration for a role in the film. We are currently working on attaching our name actors and finding an equity partner for the production.

Sax is a solo father in his mid 30s, living in Sydney. He works as a saxophone player and makes miniature sand mandalas as a hobby. He's frustrated with the confines of his normal life and he sets off on an adventure with his daughter in which he finds love and learns to allow the process of growth and change in his life. He is a creative person with questions about transience and permanence in life and art and he explores this through the course of the film developing the theme of the relationship between art and culture.

Sarah, Sax's daughter, is a cute 8 year old, who’s best friend is a fairy named Firefly, who only she can see. Sarah believes in magic and tries to teach her father the power of belief. She's articulate and a bit of a philosopher. She is bright-eyed and perky and resents her father's relationships, so does her best to sabotage them.

Zoe is a pavement artist and painter, in her late 20s. She is colorful, creative and into yoga. She is industrious in getting her art in front of audiences. She has had many relationships and finds that she tends to lose herself in her partner and so she avoids forming these bonds. Never the less she becomes Sax's girlfriend.

Adam is the Auckland Festival manager and is in his mid 30s. He's an amateur close up magician who follows a meditation practice. He likes art that challenges and loses his job at the festival because of this. However his meditation helps him to take this in his stride and he becomes the group's manager.

Councilor Thomas is a successful businessman and member of city council, who chairs the entertainment committee. His views on art are conservative and he rails against the sand sculptors in a 'Basil Fawlty-esque' manner. He's a property developer and owns the shopping mall which is the setting for the sand mandala at the film's climax. And he learns to value creativity.

Check out more information on our feature film in development, True Believers, and reviews of the novel on which it is based.

On this site you can also find the latest news and press releases or check out the production credits and production photos, find an outline of the story plus stills, read reviews of the book and view podcasts from our first feature film Butterfly Crush.

You can also check out Artmedia's digital short film, Moontan (pictured) which was released in 2007 - read the synopsis, check out reviews of the book on which the film is based, or read scene one of the script, and find information on the cast and production team.