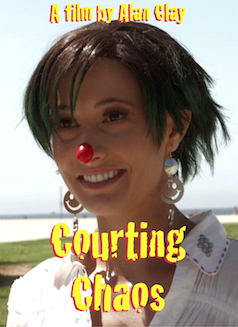 Alan Clay's award winning new romantic comedy Courting Chaos  was released in October 2014. An innocent Beverly Hills girl falls for a Venice Beach street clown named Chaos and she must overcome her inhibitions and become a clown herself for the relationship to succeed.

The film won the Special Jury Award for Romantic Comedy from Worldfest in Houston, one of the top awards from the oldest independent film festival in the world, where lead actor, Rachelle DiMaria, was also nominated for Best Actor.

"It was a great film, very well done in pretty much every aspect. Excellent acting, every character is well-written and fun to watch. Some great comedic moments, and what feels like a true insider’s peek into clown culture. I never got bored or felt like the film was too long or slow, it kept me engaged all the way through and had plenty of laughs and fun scenes to keep things interesting. A favourite element to the story is the way the protagonist must connect with her own fears and flaws on a much deeper level in order to be able to perform well as a clown. She learns that being a clown isn’t as much about being funny as it is about being honest. I really enjoyed the film, it’s funny, unique, and emotionally satisfying."  Review from the premiere at the Hollywood Reel Independent Film Festival, February 2014.

Courting Chaos is now available to rent, or buy, through IndieReign or Vimeo On Demand . Watch the trailer and check it out!

Find a trailer and more information at www.courtingchaos.com

Find background information on the book on which the characters in Courting Chaos are based at: www.alanclay.com

On this site you can also check out our first feature film Butterfly Crush, including the production credits and photos, read an outline of Butterfly Crush, watch the podcasts  or the trailer for the film.

[The link bar feature is not available in this web]