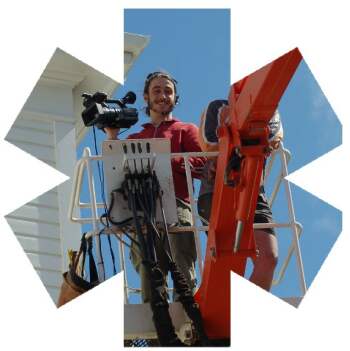 We are looking for some production and post production crew members in Los Angeles to join the team on our new ultra low budget feature film, Courting Chaos, which is set at Venice Beach and which will be shot this summer.

Courting Chaos is a coming-of-age romantic comedy, in which a Beverly Hills girl falls for a Venice Beach street clown named Chaos and she must overcome her inhibitions and become a clown herself for the relationship to succeed.

The script for Courting Chaos was written under the guidance of US script consultant Linda Seger and it is being called 'lovely' by Hollywood managers. The film will be shot over four weeks next summer at Venice Beach starting August 12.

Writer/Director, Alan Clay, is in LA and he is keen to meet with the following prospective crew members:

If you're interested in any roles in the film, please email: crew(at)artmedia.net.nz  with information on your experience and training and the role you wish to apply for.

On this site you can also find the latest news and press releases or check out the production credits and photos, find an outline of the story plus photos, read reviews of the book and view podcasts from Butterfly Crush.

New on this site you can find information on our feature film in development, True Believers, and reviews of the novel on which it is based.

You can also check out Artmedia's digital short film, Moontan which will be released in 2007 - read the synopsis, check out reviews of the book on which the film is based, read scene one of the script, and find information on the cast and production team.